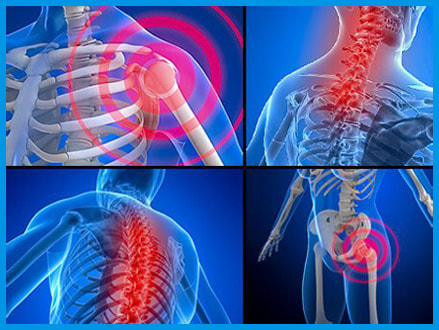 For too many who have chronic pain : It's a pain that has a life of its own, it saps energy and keeps one in bed, while giving sleep issues on top of it, sometimes because of the pain, sometimes for other reasons. It's like having been hit by a truck for many and never really recovering. People can't see the pain but it's all over your life.

Many people have that point where they can't function anymore, and get fatigued from months, sometimes years. Pain does drain quite a lot of energy and make some people's brain like it's in a fog.

Our aim is to provide you with relieving treatment so you can go back to live your life to the fullest.

Fibromyalgia is too often misdiagnosed and misunderstood. It's one of those disease that is diagnosed by exclusions, meaning if it's not the other things that can cause pain, let's file it in fibromyalgia. It's almost a non-diagnosis by definition, not much more than a name to make it make sense and an easier path to what drugs can do something

They often don't do much in the long term

​The most common way your Doctor will treat the pain of Fibromyalgia is with prescription drugs that may temporarily reduce some of your symptoms like Duloxetine (Cymbalta), Milnacipran (Savella) or maybe Pregabalin (lyrica) that are mainly antidepressant or anti-seizure medications. For pain they'll give you Tylenol, ibuprofen or naprozen sodium.

For chronic pain, there is very little to do except some painkillers.

These drugs may have some nasty side effects and cause you to feel even more uncomfortable. Ibuprofen helps with pain but will cause stomach issues when taken for long period of times

So now in addition to living with chronic pain, you might be suffering from side effects of too many medications. Living with an constant pain is very difficult because others don't see it but your body feels it.
​

How we treat you

The common principle to treat chronic pain is not to treat one pain at a time, that usually leads to nothing.

It's to strengthen the body enough that it becomes able again to get rid of those pains. A body in these sorts of pain are stuck in a vicious circle where pain drain the body of energy, and that lack of energy causes stagnation and weakening of the body, causing more pain.

Exercising alone isn't enough and is often very difficult, as not enough leaves you in pain and too much causes more pain and fatigue.

The best way to break the cycle is with giving the body more energy, so that it can do more, and more importantly so it can soothe the body of its ill.

Another avenue that is often needed is to just soothe and calm the nerves.

Sometimes, the nerves become used to be the messenger or pain and will keep going as usual, even if there is no reason anymore. This is basically a very bad habit learned by the nervous system or a part of it at that point. It sometimes makes it that an area of the body of some muscles will get themselves constantly tight and feel pain.

Soothing and stopping them is a matter of time and specific acupuncture points. It's done both locally and at an adjacent route of the nerves
​

To conclude on chronic pain

Whether you have fibromyalgia, lupus, lyme disease or none of those and yet lives in chronic pain, I'll help as much as possible.
We starts with a diagnosis, see what can be done and the form it will take. We have a plan for all sorts of issues, and should have a good idea of what to do.
It can be strengthening the body, giving it a lot of energy, soothing the responsible nerves or all of those.

​Living with chronic pain can be debilitating, isolating and lonely

Call Now at 250-420-1590
CLICK FOR A CONSULTATION
We’re confident that Sebastien can help you to live pain free – just like these patients. To book an appointment, call 250-420-1590 or complete the online form.
cranbrook acupuncture acupuncture in cranbrook